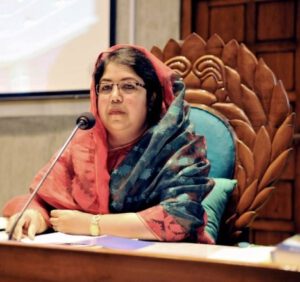 Dr. Shirin Sharmin Chaudhury, MP was born in 1966 to a humble and prosperous family. Her father Late Rafiqullah Chaudhury was a Former CSP. He served as a Secretary to the Prime Minister Bangabandhu Sheikh Mujibur Rahman (1972). Her mother, Late Professor Naiyar Sultana was a Member of the Bangladesh Public Service Commission. She is an MP from the constituency of Rangpur – 6.

She has been brilliant in her academic and professional life. She passed her SSC in 1983 with the 1st position in combined merit list from Humanities. Then She got 2nd position in her HSC in 1985. She became first class first in her LLB degree from University of Dhaka in 1989. Later she completed her LLM with the same distinction from the same institution. She got the commonwealth scholarship and obtained her Ph.D. on Law from University of Essex. Her thesis was on “The Right to Life” and her area of Specialization is Constitutional Law and Human Rights.

Besides, her efforts and contributions to the society have been recognized by many national and international entities. Dr. Shirin was awarded Asia Society’s Humanitarian service Award on 09 June 2010 in recognition of her role as a leader in advocating the elimination of violence against women and mainstreaming women’s empowerment and employment in Bangladesh. Dr. Chaudhury received this award from Ambassador Melanne Verveer, US Ambassador-at-Large, Global Women Issues in a gala award ceremony at the Ritz Carlton Hotel in Washington DC.