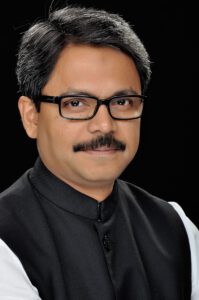 The State Minister for Foreign Affairs of the People’s Republic of Bangladesh, Md. Shahriar Alam, MP is a paragon of the young generation for his active role in the Awami League since 1997. He has also served as a member of the Awami League Sub-Committee on Information, Research & Publicity and Publications.

Mr. Alam has thrice been elected as a member of the National Parliament, consecutively in 2008, 2014 and 2018 from the Rajshahi-6 constituency with the highest victory margins.

Mr. Alam was first sworn in as the State Minister for Foreign Affairs on 12 January 2014; and again reappointed on 7 January in 2019 for his continued success at the Ministry of Foreign Affairs.

As the State Minister for Foreign Affairs, Mr. Alam has been actively representing the Government of the People’s Republic of Bangladesh in various international forums. He acted as the Vice Chairman of All-Party Parliamentary Groups (APPGs) on Climate Change, Education and Poverty Reduction; and on Millennium Development Goals (MDGs), Poverty Reduction Strategy Paper (PRSP), World Trade Organization and Bangladesh Development Forum.

Under his leadership Bangladesh participated in International Covenant on Economic, Social and Cultural Rights (ICESCR) meeting of the UN Human Rights Commission, Convention Against Torture (CAT) and the 3rd Universal Periodic Review (UPR). All these enormously elevated the human rights condition in Bangladesh.

Besides political career, Mr. Alam has also achieved enviable fame as a prominent entrepreneur. His companies have now been exporting textile products to major destinations including, among others, EU countries, the USA, Japan, Australia and Russia. His outstanding entrepreneurial success was awarded with the National Export Trophy in Knitwear Category in 2007-08. More than 25 thousand employees are now working in his business.

Out of corporate social responsibility, Mr. Alam trains disables with the assistance from Center for Rehabilitation of the Paralyzed (CRP) and employs the highest number of physically challenged individuals. This led to the conferment of CSR Award from Global buyers on him.

Md. Shahriar Alam is well-known for his pro-people commitments. An avid promoter of education, he spent all of his remuneration received as the Member of the Parliament to run monthly scholarship programs for secondary school students of his constituency. Mr. Alam is an avid patronizer of a famous SME enterprise named ‘Kaluhati Shoe Cluster’ located in his own constituency. He is devoted to developing the enterprise and internationalizing its products. Besides, he actively promotes Rajshahi-brand agricultural products like mangoes, sugarcanes, lychees, Molasses etc. at home and abroad. In pursuit of a poverty-free Bangladesh, he established the North Bengal Development Forum to adopt different development agenda of the region.

Mr. Alam is quite passionate about reading, music and sports, especially cricket, football, hockey, golf and lawn tennis. He established the first ever Cricket School in Rajshahi and some of the cricketers of this school have proved themselves to be accommodated in the national cricket team. He has served as the Vice President of Bangladesh Hockey Federation. Currently he is the President of Bangladesh Tennis Federation and one of the Directors of the Abahani Limited, the biggest sports organization of the country. He has always been deeply involved in sensitizing people about creating an ethics-based work environment where everyone is held accountable.

Mr. Alam is born in 1970 in Chittagong and brought up in Lalmonirhat and Rajshahi. He received his Bachelor of Commerce Degree from Dhaka City College and thereafter, obtained an MBA (Master of Business Administration) from the Institute of Business Administration (IBA), University of Dhaka. Mr. Alam completed CAPSTONE course at the National Defense College, Dhaka. Mr. Alam is married and blessed with two sons and one daughter.